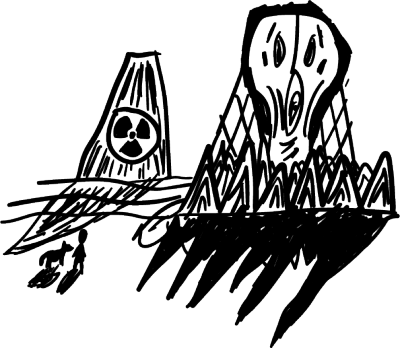 Man laid his fire to rest and tried to forget, for he knew that only though oblivion would he be free. But then he started to worry that his children might find the burial chamber, and awaken the fire from its sleep. So he bade his children to tell their children, and their children’s children, to remember forever, to consign the burial chamber to oblivion. To remember forever, to forget.

Homo Sapiens reached behavioural modernity 50,000 years ago, when we diverged from other types of humans by beginning to draw, paint and organise ourselves into complex, myth-based societies. We spent 40,000 of those as hunter gatherers, roaming the land, before settling down 10,000 years ago. The time of Christ was a mere 2,000 years ago, the colonisation of the Americas 500, the invention of the internet only about 40. The humans of 100,000BC were unrecognisable. What will we look like in another 100,000 years? Will we exist at all?

One thing that will exist is our nuclear waste. Spent fuel from nuclear power plants takes 100,000 years to become safe, meaning it will probably outlast the society it helped power. And every year there is more. For India and China to catch up with Western living standards, we must build three new nuclear reactors every day over the next 20 years. All will generate waste.

You are now in a place where we have buried something from you to protect you. We have taken great pain to ensure that you are protected. We need you to know that this place should not be disturbed. This is not a place for you to live in. You should stay away from this place. Then you will be safe.

During the time it takes for that waste to become safe, we must store it somewhere secure. We have decided that the safest place is deep underground in special repositories.

One of these is Onkalo, in Finland. Onkalo (meaning ‘cave’) is the subject of 2010 documentary Into Eternity. Director Michael Madsen focuses on how the engineers and scientists behind the project intend to prevent the repository from being reopened by humans in the distant future.

Once Onkalu reaches capacity in 2120, it will be encapsulated in concrete and sealed forever. It will be at that time that we must decide how to mark the repository.

If we do not mark it, humans may forget it is there. But we cannot predict the future. We can barely predict what the world will look like in even 50 years. We have no way of knowing if sometime in the coming millennia humans might decide to drill a large hole in rural Finland, as we have done. The engineers in charge of Onkalo used to joke that the first thing they would find when they started digging would be an old copper storage canister, like the ones they themselves were planning to use.

Over the next 100,000 years, our species will endure catastrophes and tragedies too numerous and terrible to imagine. Climate change, warfare, over-population, earthquakes and impact events could all have a huge effect on society. The most significant will be the next ice age, scheduled to start in 60,000 years time. A combination of these events may result in humans readapting hunter gatherer lifestyles and gradually forgetting the knowledge of how society used to be.

Is it possible that humans in the distant future, who no longer recognise the languages of our time, who have lost the knowledge that we possess today, will view Onkalo with the same wonder as Howard Carter felt when he opened the tomb of Tutankhamun? Might they interpret it as a religious shrine, or a treasure? They would feel the same urge to dig, unaware of the danger hidden deep inside.

Humans are curious creatures. Whenever we happen on clues of long-dead civilisations, we dig on, hungry for knowledge. When Carter found Tutankhamun’s tomb, he didn’t stop to decipher the ancient symbols on the walls before ploughing onwards, deeper.

How to warn the humans of year 102,018? In the film, the engineers consider different ideas. The facility must remain safe and secure, even in a future where knowledge of it and the substance it contains is gone. It must maintain itself; it cannot rely on human beings.

An initial obelisk could explain in the six languages of the UN, as well as in pictographs, what is buried there and that it is dangerous. Then, if the humans decide to proceed anyway, they would find a central information point. That would contain information on the periodic table, the astronomical calendar and radioactive substances, inscribed in granite.

In case the people cannot read, these ‘markers’ may also be designed to communicate with them on a more basic level; to provoke fear. Huge concrete blocks. Carvings of skulls. Landscapes of  jagged concrete thorns. A man running.

You should not be here. You must leave.

We are plotting the cave paintings of our era. Humans may learn of Onkalo in the same way we learned of biblical legends. Warnings passed down generations, lessons reaching through time from a mythical age when man, trying to play God, harnessed the power of the universe and turned it on himself. 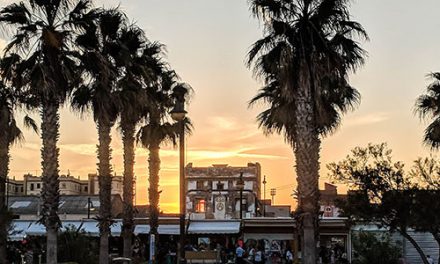